LifeLine Pilots is proud to present Dr. Gareth Eberle with the 2020 Pilot of the Year Award*. Dr. Eberle generously flew 13 legs with a Hobbs time of 51 hours for a total of 3,134 miles. Congratulations on receiving this inaugural award!

Dr. Eberle is based out of Rockford, IL (RFD). He flies a Beechcraft 58p series, six-seater, and is instrument rated. Dr. Eberle is a dedicated volunteer pilot, whose personal records date back further than our database. His missions flown are many more than the impressive 42 legs shown in pilot/passenger database.

Dr. Eberle developed a love of aviation from a young age. As a grade schooler, he would see small planes flying low along the Oregon coastline and imagined the possibilities. It seemed like an impossible dream. The young man grew up to go to medical school, which left little time for other pursuits. After earning his MD, a fellow physician, who had become a private pilot, invited him to take a flight.

After a sample lesson, his passion was apparent. In only five months he earned his private pilot’s license. From there he sought further training and became instrument rated. 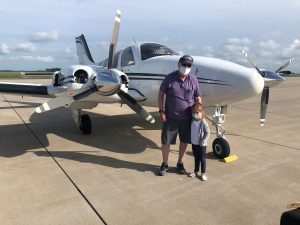 “After a few years (of piloting), I received a letter from Wanda Whitsitt explaining LifeLine Pilots of Illinois,” Dr. Eberle explained. “She was asking for volunteers. It seemed like a great way to stay current and help people.”

“One of my most memorable flights was the evening of June 14, 1992. I believe it was towards the end of the last game of the Bulls NBA Championship. The patient had been waiting for Mayo Clinic to tell him the liver transplant he had been waiting for was available. He needed to get from Moline to RFD (Rochester, MN) within a few hours.”

He continued, “The coordinator hadn’t been able to reach the pilots who were listed as being on-call for his flight. It was a night flight, with rain and scattered thunderstorms forecast. I expeditiously drove to RFD and flew to Moline to pick up my passenger. On the way to Rochester, I mentioned that I’d missed the end of the championship game.”

This championship game was one of THE big games. The Bulls were competing for their history-making fifth repeat championship win against the Portland Trail Blazers. When Dr. Eberle departed at the last minute to fly at night in the rain, his team was down 15 points.

As luck would have it, the passenger had watched. Fresh in his mind, he was able to describe the explosive action to Dr. Eberle while they made their way to Rochester, MN, for the patient’s life-saving transplant. Dr. Eberle embodies the spirt of LifeLine Pilots. At a moment’s notice he didn’t hesitate to give up a personal pleasure to serve another. We all thank Dr. Eberle for his many years, missions, and hours of charitable flying.

*The Pilot of the Year Award is calculated by determining the average of a pilot’s legs flown, miles flown and Hobbs time.