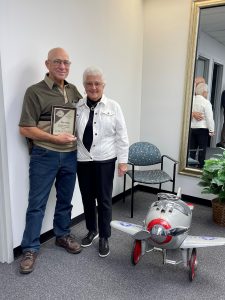 LifeLine Pilots is proud to present Dick Miller with the 2020 Wanda Whitsitt Founder’s Award*. Miller is now retired but flew for LifeLine Pilots for over 20 years.  Our flight database has recorded 329 legs, 88,845 miles for a total of 700.4 hours which translates to an awesome $1,331,460 in flight costs generously donated by Miller. Congratulations on receiving this inaugural award!

Miller, a lifelong resident of Washington, IL, was based out of the Mt. Hawley Airport (3MY) in Peoria, IL. During his tenure, he flew many aircraft, the last one being an Socata TBM 850 that could fly up to 3,500 nautical miles and seat eight people. Miller was a dedicated volunteer, constantly requesting missions, as well as filling empty legs, and flying last-minute cancellations. He also served on the Board of Directors, beginning in 2010.

Miller was an aviation enthusiast from an early age.

“I hated to drive,” he chuckled, “I’d be driving to my wife’s parents, and I’d pull back on the steering wheel and imagine flying over the wires.”

Miller founded Miller Welding in 1965 and sold it in 2008. While growing the business, Miller flew to see customers all over the western United States, honing his skill as an experienced command pilot.

“I [flew] for business,” he said. “It was helpful to see the customers instead of trying to do it over the phone.” 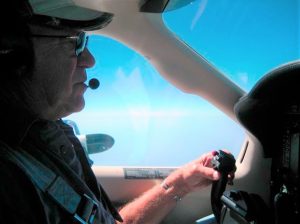 Miller’s life. Once he could afford to give back, he did so with dedication and determination. Miller flew all ages, from babies to seniors, with a wide range of ailments. He flew strangers who became friends and friends who became like family. Mostly he remembers the children.

“I went to a lot of funerals in those days. I remember these twins who had identical brain tumors. When they died, the whole town turned out,” he reminisced. “But it wasn’t all bad! I liked to fly to Memphis. They can just about cure leukemia down there (St. Jude Hospital).”

Miller remembers a humanitarian mission he completed. “I flew this old man to see his sister – she was in a wheelchair. Then I heard that a couple of months later one of them died. It was the last time they saw each other. They got a chance to just sit and talk.”

Age and health mandated retirement from piloting and Miller said, “I really miss doing this. The worst thing I’ve had to do was quit flying.”

LifeLine Pilots is grateful Dick Miller chose to share his love of aviation with us.

*The Wanda Whitsitt Founder’s Award recipient is a legacy award based upon total service. This award is given to a pilot who has demonstrated an on-going, multi-year commitment to LifeLine Pilots in both flight legs and hours flown and emergency availability. Additional consideration will be given to a pilot who has made a financial gift to LifeLine Pilots.